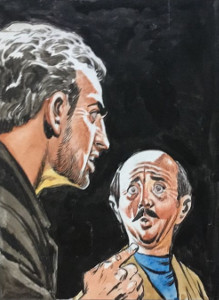 Episode 41 of The Trigan Empire

The Palace of Peril
aka The Glass-Palace (The Collection)
Het complot (Dutch title)
The Conspiracy (Dutch title, translated)

It is reprinted in the Don Lawrence Collection Volume 10, The House of the Five Moons.