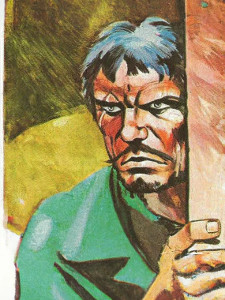 Episode 82 of The Trigan Empire

The Zolts were once a slave race. The Zolts are very strong, but not very smart. Trigo once gave the slave people back their freedom and gave them the same rights as all other Trigans. The Zolts are the greatest athletes and best fighters on Elekton. Recently, however, there have been difficulties in the people of the Zolts. The Zolt leader Luctor is attacked by Malitor. Malitor thinks that their people are actually not free at all and are still slaves. Trigo discusses the problem with Peric and his advisors. He believes that the Zolts have become fighters and athletes of their own volition. There is a duel coming up between Luctor and Malitor and they decide to let it go ahead. Malitor smears poison from the nobra on the sharp blades of the net they fight with. During the fight, Luctor receives deep scratches from the net on his body. Soon the poison takes effect and Luctor passes out. Malitor wins the duel and Luctor’s body is taken from the arena. Salvia tends to Luctor and Peric discovers the poison. He tells Trigo that there has been cheating. Trigo wants to arrest Malitor, but Peric stops him. He fears that if they take sides, fighting between the Zolts will ensue. But fights break out between the Zolts anyway. Trigo sends his army between the two fighting sides and stops them. He banishes all Zolts from Trigan and sends them into the desert.

They head to Tharv, the country where they originally come from. In the desert, they meet a group of desert warriors. They take the Zolts to their city and give them food and drink. But they are captured and the desert horsemen want to sell them as slaves again. In the evening a few more prisoners join them. They are Tharvs and one of them is called Fidelius. Malitor knows Fidelius, because that is Peric’s son. Fidelius is surprised that his father is alive, as he thought he had died fighting the Lokans. Fidelius has wandered the desert for years. Malitor suddenly regrets what he did to Luctor, who was a former servant of Peric’s. They decide to escape and Fidelius tells them his plan. But two guards hear that plan and want to tell their leader, but the Zolts realise that and overpower the guards. They all go to the wall of the city, which is called Aquasalba, and make a pyramid of people. So they climb over the wall and overpower the guards on the outside of the city. They open the gates and break open the doors of the guard house. They recover their weapons and battle the desert horsemen. The Zolts open the sluice of the water reservoir and the city is flooded. The Zolts all escape the city. Trigo worries about the Zolts. Luctor is healed and wants to get the Zolts back. The desert riders have been chasing the Zolts and attack them. But Trigan’s fleet intervenes and the desert horsemen retreat. Peric, who came with the fleet, meets his son. The Zolts are taken back to Trigan City in atmosphere craft. Malitor apologises to Trigo for the uprising and Trigo forgives him. Peric is happy to have his son back.