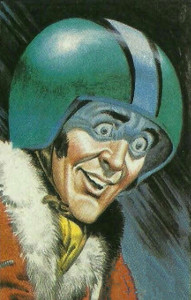 Episode 34 of The Trigan Empire

The Fiendish Experiment
aka The Man who could turn himself to Water
The Hydro Man (The Collection)
De gestolen formule (Dutch title)
The Stolen Formula (Dutch title, translated)

It is reprinted in the Don Lawrence Collection Volume 9, The Curse of King Yutta. 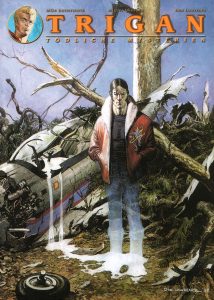 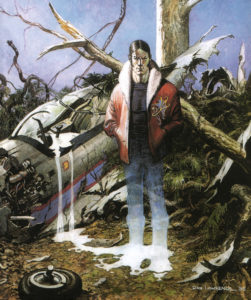 Typical stories from this period prominently feature the Emperor Trigo, his nephew Janno, and the great scientist Peric. This is a typical story. From the rest of the regular cast of characters, the Emperor’s brother Brag, and Janno’s close friend and Air Fleet comrade Keren, make brief appearances. Keren’s father Imbala, the King of Daveli, makes a rare appearance in this episode.

Vella, the villain and central character of the story, is a pilot in the Air Fleet.

Vella’s accomplice is Zerros, a crooked scientist and escaped convict.

The unnamed individual pictured is the leader of the most powerful criminal organisation in the Trigan Empire. Slakka is his personal assistant.

Our story opens one Empire Day. We are not told the year, but perhaps it is the first year of Ziss. As is customary on Empire Day, there is an air display from the Trigan Air Fleet. This particular year, the high spot of the display is a demonstration of aerobatics by two fighter-craft chained together ! The pilots are Janno and Vella.

Vella kills the big-time crook and his hapless secretary. Later, he kidnaps Imbala, the King of Daveli.

550 Janno and the pilot Vella perform a dangerous stunt during an air show. Their two planes are linked by a chain. After the flight, a man approaches Vella. He says he has to pay his debts. Vella and Janno visit Perik. Perik says he has made an important discovery, but that it is very dangerous. When they leave, Vella steals the book with the formulas.

551 Vella rescues from the mines a great scholar who was serving his sentence there. This scholar, Zerros, builds a device with which he manipulates Vella.

552 This allows Vella to turn into water and back to a normal human being. When it takes the form of water, it can deliver electric shocks to people. So first he kills his creditor.] A ruthless Air Fleet pilot named Vella has stolen a terrible invention from Peric the scientist. He is now able to change himself into electrically-charged water at will—in which fiendish state he has already destroyed his worst enemy.

553 During a visit from the Emperor of Daveli, Janno and Vella have to perform the dangerous aerial stunt one more time. Because Janno has to sneeze during the flight, Vella crashes, but just before the crash, he turns himself into water.
|
554 His plane is completely destroyed, but he himself does not have a single scratch. Everyone is very surprised about that. In the evening, Vella turns back to water and steals the crown from the emperor of Daveli.

555 Vella also goes to the Imperial Archives and discovers the greatest secrets of Trigia there.

556 He discovers that Trigia has missiles aimed at Daveli and blackmails the Emperor into telling him. Emperor Trigo decides to pay two thousand Zerts to prevent this. Together with Janno, he brings the ransom. Janno stays behind to see who will collect the ransom, but he is struck by the electrically charged water.

557 However, he is only unconscious and tells the story to Perik. He immediately understands that someone has stolen his formula. Vella now kidnaps the emperor from Daveli and wants to demand a ransom for it.

558 He hides the Emperor in a secluded cave. Meanwhile, the Trigia police have discovered Vella’s apartment with Zerros’ equipment. Perik has learned that Vella has stolen the formula because of the plane crash, in which he was unharmed. Vella flies back from the abandoned cave to Trigia, but is caught in a storm. He turns himself into water, but is struck by lightning. All water droplets evaporate. Zerros tells where the Emperor of Daveli is.