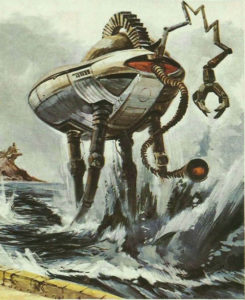 Episode 68 of The Trigan Empire

How did the Trigan Empire end? With the Curse of Zonn? Perhaps! This is the last published story that we know for sure was written by Mike Butterworth. (There seems to be no reasonable doubt that Butterworth is the author, although there is still some confusion.) Twelve years before it was Butterworth and artist Don Lawrence who created the strip. Thereafter every week a fresh installment of the Trigan Empire written by Butterworth appeared on newsagents’ shelves. Butterworth took only one break, for four weeks at the start of 1975. (During which time The Brief Reign of Sennos the First, a story which had first appeared in the 1968 Ranger Annual—and was almost certainly written by Butterworth—was reprinted.) And then . . . it happened! Butterworth decided that he’d had enough.

This episode in the annals of the Trigan Empire is notable for being both a first and a last. The Curse of Zonn is the last tale to be penned by Mike Butterworth and the first tale to be illustrated by Gerry Wood.

The next story (Episode 69, Battle for Survival) may or may not have been written by Butterworth, but, regardless, it’s Butterworthy—and superbly illustrated by Oliver Frey. It was originally published in 8 installments in issues 826 (12 November 1977) to 833 (31 December 1977) of Look and Learn magazine. After this, the franchise should have been wound up. But for the next four years and a bit the strip lurched on, with Ken Roscoe as writer and Gerry Wood as illustrator, until the eventual demise of the parent magazine itself.

Gerry Wood was a capable artist—take a look at the cover art of issue 820 (1 October 1977) of Look and Learn, for example—but he wasn’t always in his element when it came to illustrating the Trigan Empire. One particular issue with Roscoe and Wood is that, at the time they took over from Butterworth and Frey, it seems that neither had any familiarity with the strip. Wood is ignorant of the proper use of Elekton script. Instead, we have buildings visibly adorned with “National Bank” and “Casino” in the alien English language.

Now to the story itself. It is unexceptional, but reassuringly typical of Butterworth.

A gang of criminals targets wealthy coastal and river towns with a giant submersible vacuum cleaner with a pincer. The thing from the sea strikes first at the seacoast town of Zootha, where Janno and Peric just so happen to be taking a vacation. The Zootha skyline is dominated by Mount Rathos, a dormant volcano.

Peric recounts the legend of Zonn: there used to be an idol of Zonn that was worshipped. The authorities wanted to stop the idolatry and sent in the city guards, but the soldier who attempted to seize the idol was struck down by lightning. And then . . . Mt. Rathos erupted. The town of Zootha was destroyed and thousands perished.

Recently, the remains of the Temple of Zonn have been excavated and the current inhabitants of Zootha perform a re-enactment for the tourists. But during the performance, the volcano starts to smoke again. Panic breaks out and people flee. Peric and Janno think it’s all rather strange and drive up towards the summit of the volcano. They witness a monstrous machine emerge from the sea, destroy parts of the city, and then break open the bank and loot the safe.

Jewelers are also looted. Janno and Peric are knocked unconscious in a surprise attack by the criminals. When they recover consciousness, they are in Janno’s auto which is balanced precariously on a protruding rocky outcrop. They manage to save themselves and return to Trigan City.

Peric anticipates that the criminal gang will strike next at the town of Zorgos, situated below a water dam. Two lunar months later, the criminals capture the dam at Zorgos. They open the floodgates a little and announce that the dam is about to burst. Panic breaks out again and people flee. Then the strange machine appears again and makes its way to the bank. Janno, who was on the lookout, is sucked up by the machine’s vacuum cleaner appendage. The machine breaks open the bank, but soldiers of the Trigan army lie in wait. They fight the machine with tanks, but to no avail. Meanwhile, inside the machine, Janno lunges for the controls, giving the Trigan forces the opportunity to tip over the machine. They enter and overpower the criminals.